This year for me started with a surprise. Someone posted a link to Ostriv website in /r/Banished/ subreddit and in next couple of days I’ve got more visitors than for whole three months this site exists. Good to see my target audience appreciated the project even in such an early state of development.

Meanwhile the development goes on. 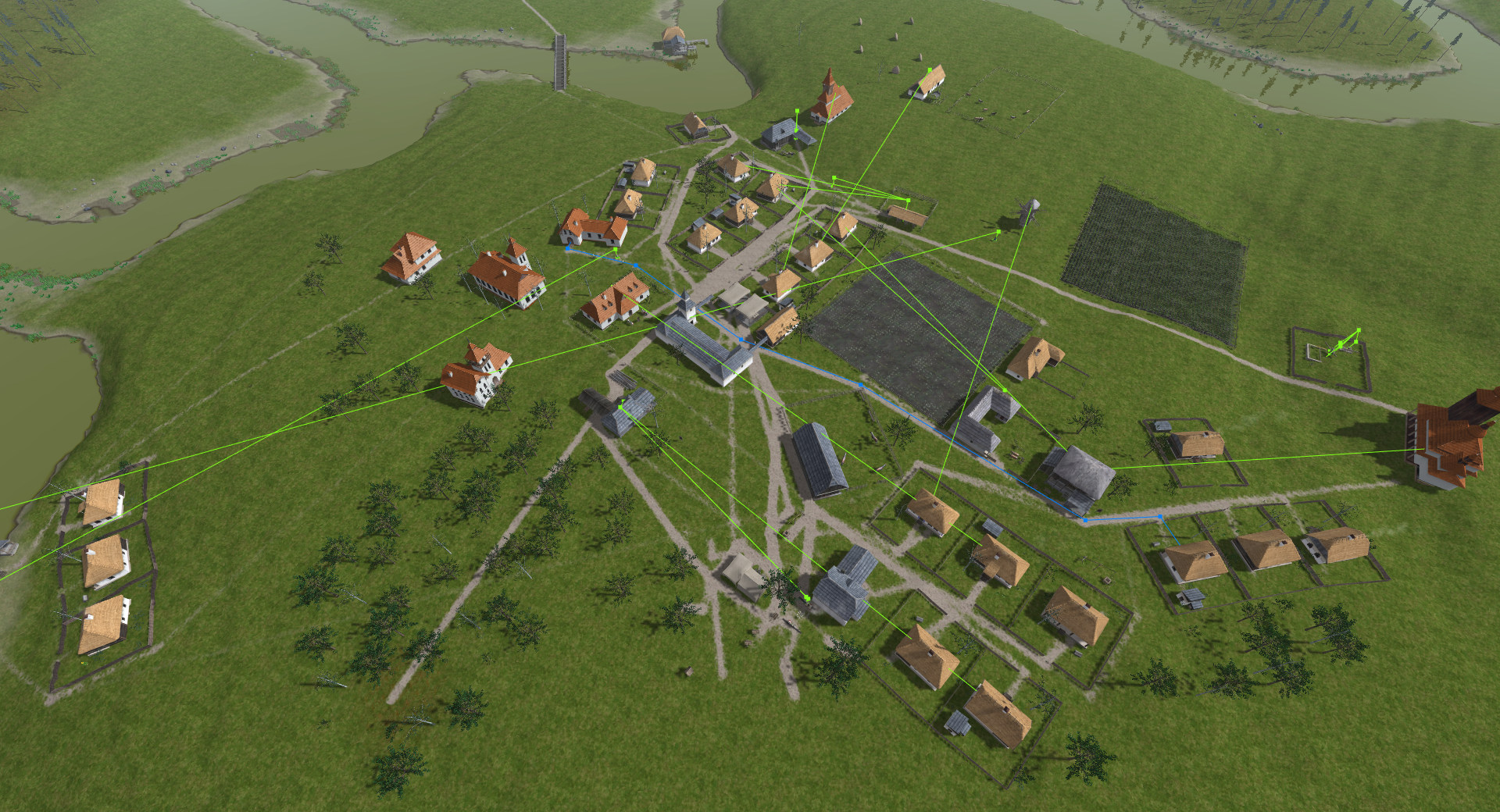 In early January, I made a rough outline of key steps for the next few months. Next biggest milestone is a start of Steam Greenlight campaign in late February or in March. By that time I have to make the game look presentable. First of all it means models and animation of characters. It would be better to delay this task some more, as it doesn’t impact the gameplay, but marketing requires some sacrifice from development. One of the moments when you realize how it’s ridiculous when developers show gameplay trailers of games not even started their development.

Also one of the things I wish to show in Greenlight video concerns my new idea about town-style construction, which is going to let the player create real city blocks of any form and customize the look of every building. For now it’s just a paper concept, but I hope you’ll see it in action really soon. 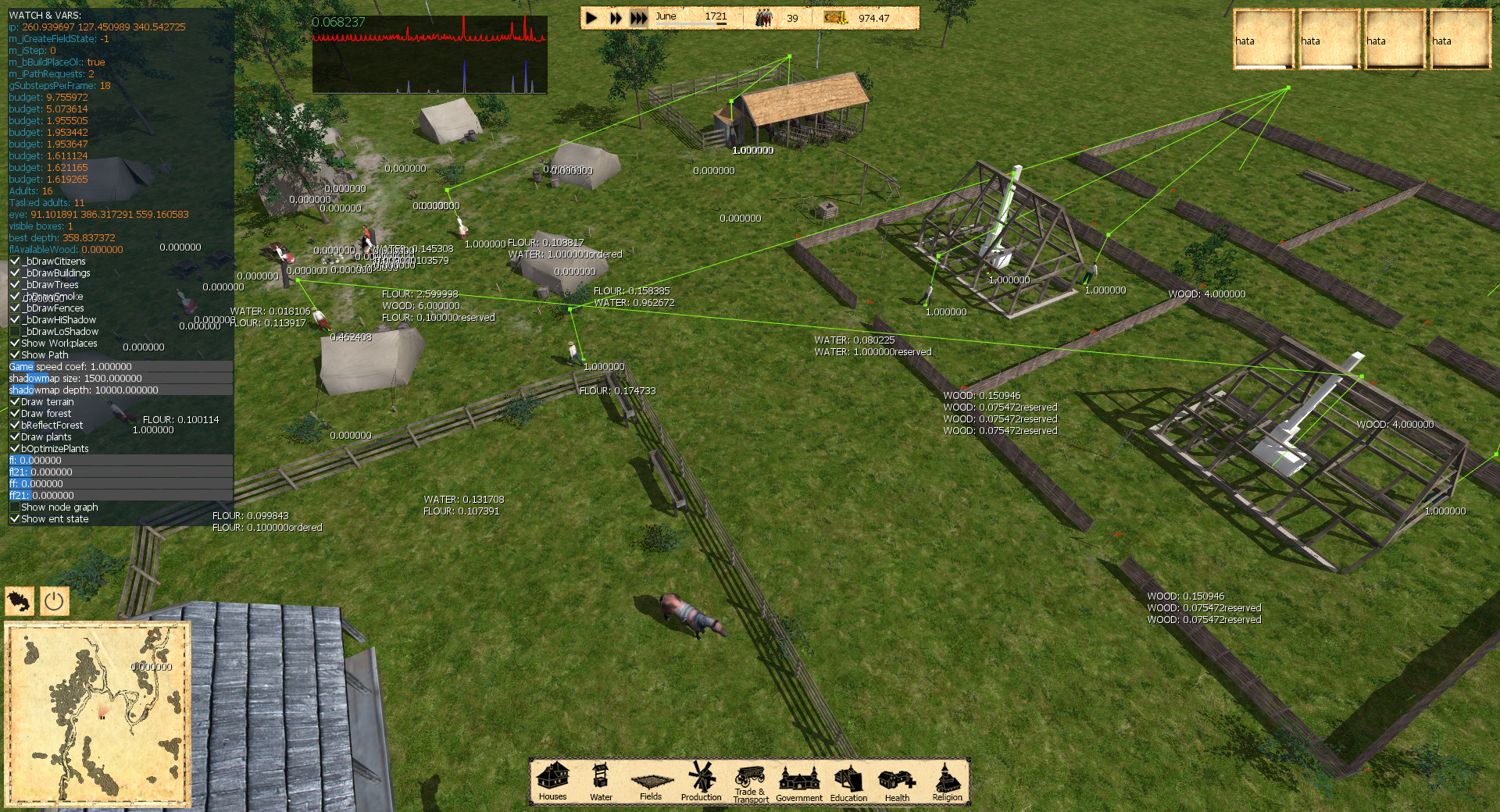 Meanwhile the “village-style” gameplay is shaping out. This month I managed to complete the first real gaming session, during which the citizens cleverly constructed buildings, moved resources and even exported products. Before this time all my sessions were always interrupted by CTD’s or logical errors when wagons were thrown out of the universe or twisted in an endless infernal dance 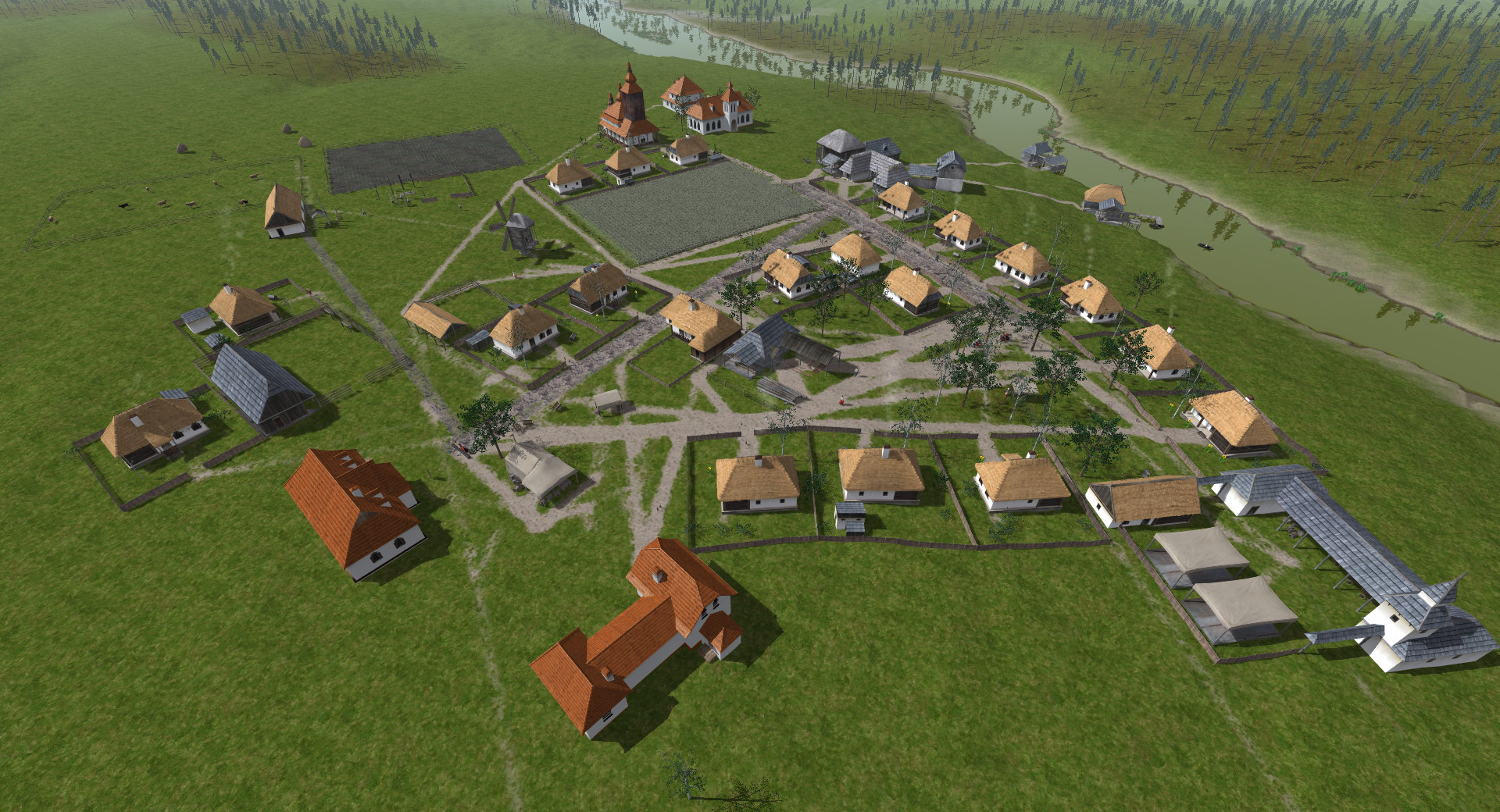 Now that the game starting to look like a classical city-building game, I can see a perspective for further development. Considering that Ostriv has much smaller scale than modern-city-building games like SimCity 4 or Cities: Skylines it’s reasonable to pay more attention to detail.

One of the ways towards detail could be the concept of inventory. There’s already some elements of this concept in game: every wagon, boat or plough is being made by local carpenter and becomes a part of city property along with products and raw materials. Same applies to animals being bred not just for food and clothes production, but also as a working force

The next thing I want to test is broadening this concept with crafting various means of production, tools and equipment. This means it wouldn’t be enough to just construct a building from wood and stone to start some production. It will require to arrange workplaces with all necessary equipment. I think the fun will begin when all these things will be part of the economy and will be available to consumers, which in turn will be able to start their own production.

Few days ago I’ve added a feature of plowing field, which for some reason never had attention from city-building games: 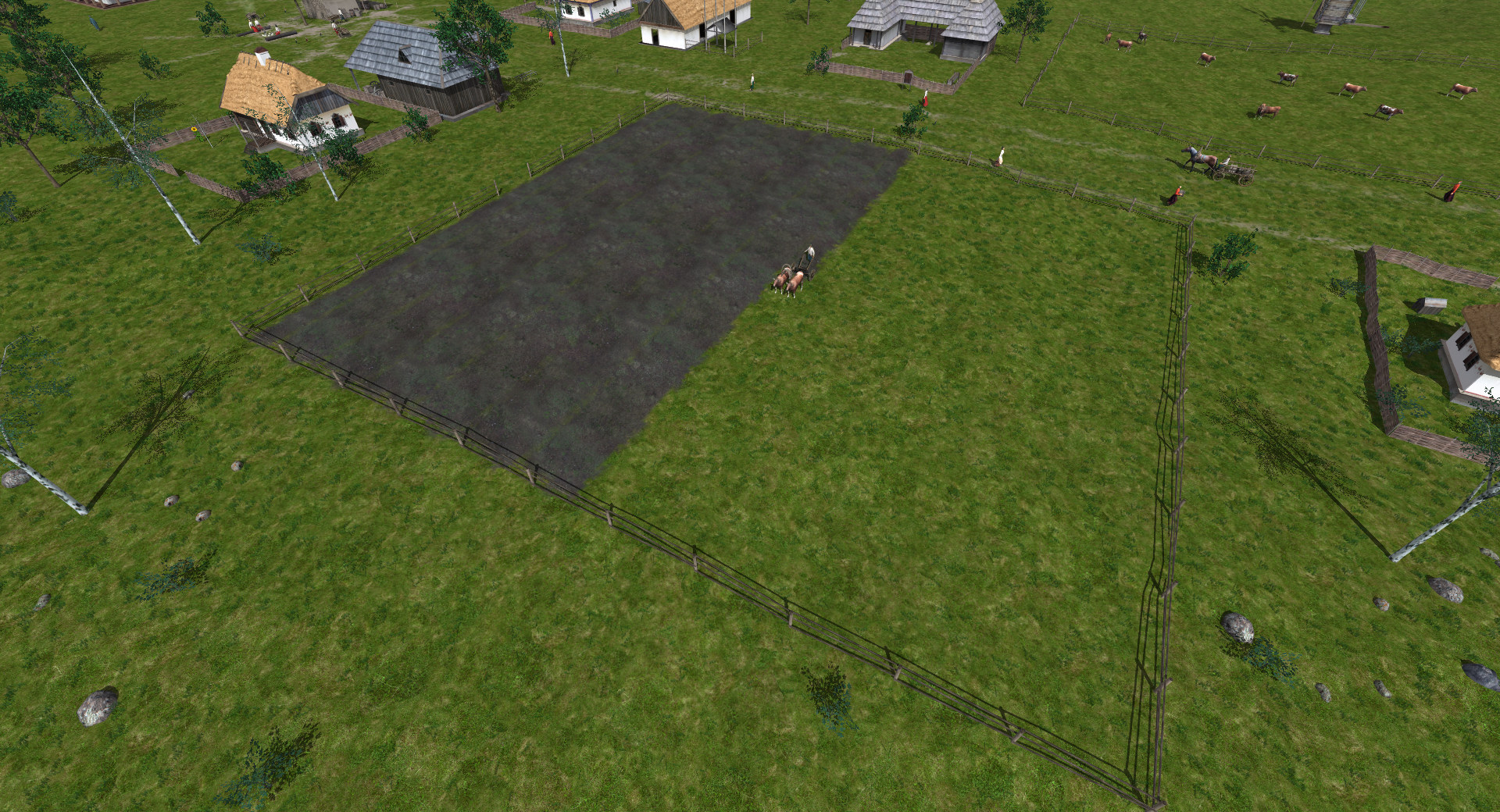 Obviously, city-building games fans are people with high self-actualization needs. With this in mind, I want to add as much as possible tools to customize the appearance of buildings. One of the new features – buildings colors. Now the player can choose their own colors for painted walls: 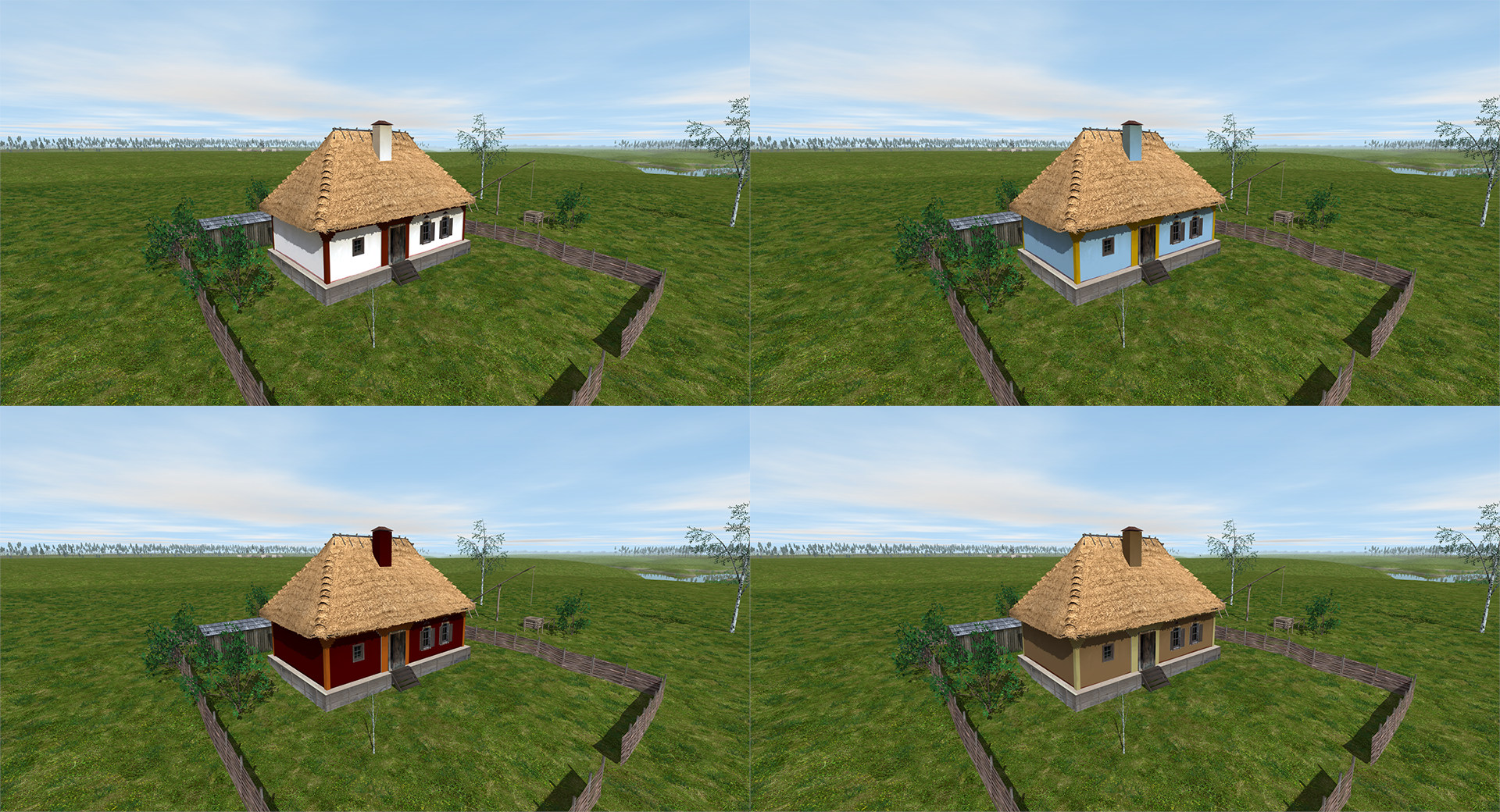 The regions of painted surfaces are defined in a separate texture map together with the specular reflection map, which will also be available for mod creators. Later I plan to add the ability to apply ornaments on the walls, which will be selected from the list of available patterns.

In the next couple of weeks I plan to slightly improve models and textures of trees and publish a video demonstration of my unique technology that controls the life cycle of plants during different seasons. 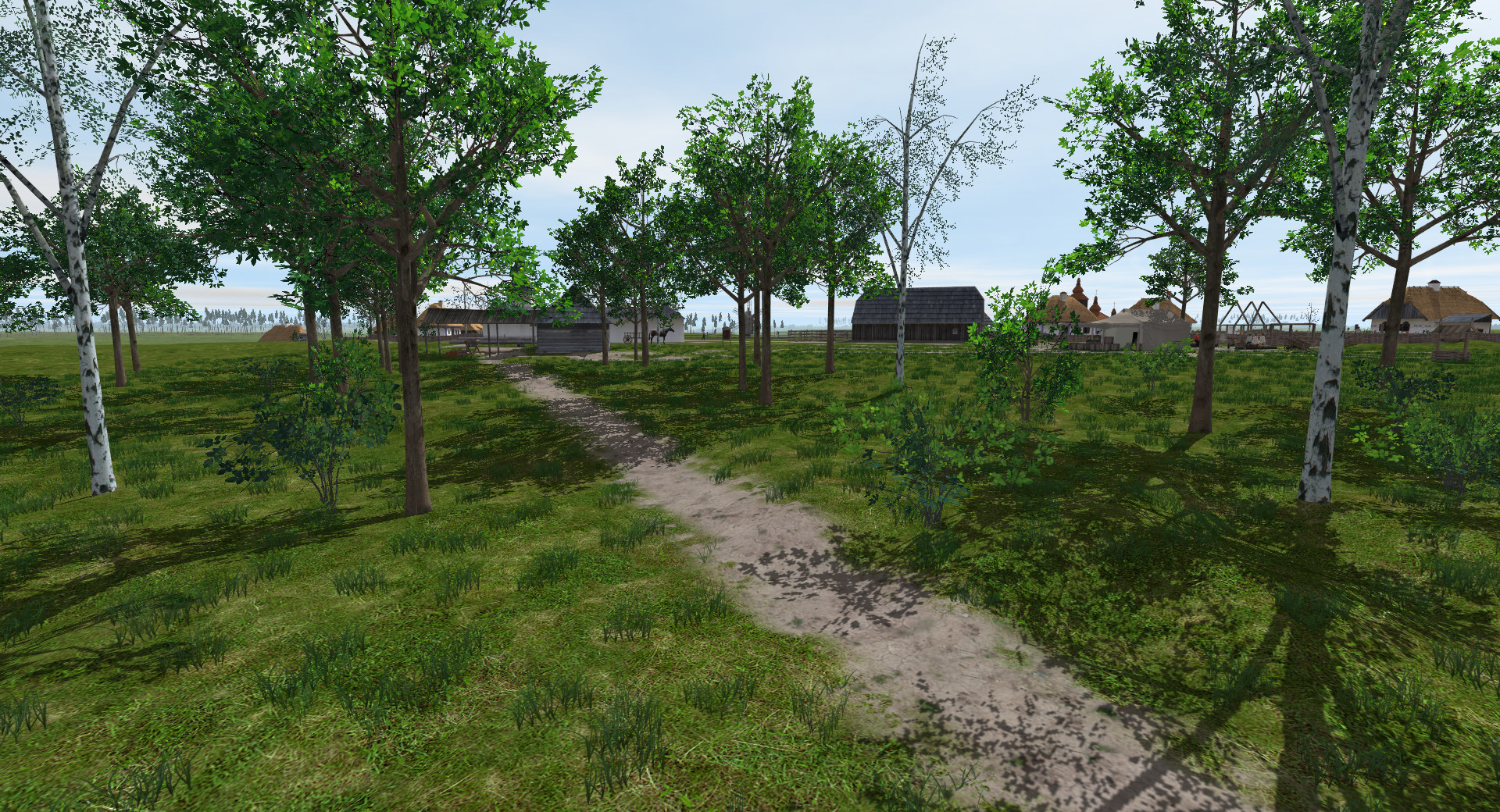 Share your thoughts in comments below or on an official subreddit: /r/OstrivGame/